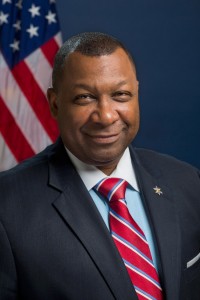 Steven W. Tompkins, a member of the Suffolk County Sheriff’s Department since 2002, was appointed to serve as the Sheriff of Suffolk County on January 22nd, 2013 by Governor of Massachusetts, Deval Patrick. In November of 2014, he was elected to the office.

As the Sheriff of Suffolk County, Tompkins manages all operations at the Suffolk County House of Correction, the Suffolk County Jail and the Civil Process Division. In addition to providing care, custody and rehabilitative support for inmates and pre–trial detainees, Tompkins also oversees a management, security and administrative staff of over 1,000.

As the former Chief of External Affairs for the Department, Sheriff Tompkins supervised his own division and was a member of his predecessor’s nine-person Executive Team, which was responsible for the day-to-day management of all Sheriff’s Department operations. As the Chief of External Affairs he established sustainable partnerships with municipal agencies, neighborhood organizations, civic associations, local businesses and crime watch groups to increase community engagement in deterring youth crime and improving reentry programs. Sheriff Tompkins created the innovative “Common Ground Institute,” a vocational training and re–entry program that teaches marketable vocation skills in a classroom setting and allows inmates to hone those skills by renovating public lands and facilities throughout Suffolk County. One of CGI’s most unique features is its job placement component for graduates with employers who hire with full knowledge of the offender’s criminal history.

His work also focused on youth violence and crime prevention. He created the “Choice Program” which sends trained officers into the schools of Boston, Chelsea, Winthrop and Revere to deliver on the program’s mission of helping young people to make positive choices for future success while reinforcing the theme of respect for oneself and for others around them. Officers speak with students about a variety of topics specific to today’s youths including the dangers of drug use and gang involvement, as well as the consequences of criminal activity. Students are also educated about the role of government and good citizenship.

He also oversaw the popular “JailBrake,” a program that directly targets youth at risk for involvement in the criminal justice system. JailBrake is designed to help reduce the rise in violent acts committed by adolescents in Suffolk County and to curtail the increase in the number of young people being incarcerated by emphasizing the realities of imprisonment including: lack of control, lack of privacy, and responsibility for one’s own actions.

Before assuming his post at the Sheriff’s Department, Chief Tompkins served as the Director of Marketing and Public Affairs for the Dimock Community Health Center and served for ten years at AT&T Cable, prior to its purchase by Comcast Cablevision, where he produced scores of television programs, and industrial packages and public service announcements for nonprofit organizations and politicians. While at AT&T, he also served as a member of the communications cadre for the Federal Emergency Management Agency (FEMA) where he was a field producer for the agency’s internal television network and press liaison for FEMA’s New England Region.

Sheriff Tompkins holds a Bachelor’s Degree in Communications from Boston College and a Master’s Degree in Public Affairs from the University of Massachusetts.

Sheriff Tompkins is the President of the Massachusetts Sheriff’s Association – his second time serving in this capacity – and is an engaged community leader and respected advocate, currently serving as the Chairman of the Board of Trustees for Roxbury Community College and as the inaugural President of the Massachusetts Chapter of NOBLE (National Organization of Law Enforcement Executives). He previously served as Vice Chair of the Board of Trustees for Roxbury Community College, and completed a three-year term as a member of the prestigious Emerging Adult Justice Learning Community at Harvard University’s John F. Kennedy School of Government. In 2011, Tompkins was appointed by Governor Patrick to serve as a Board member of the Boston Finance Commission. Sheriff Tompkins also serves on the Foundation Board and formerly served as chair of the Community Service Board for the Dimock Center, a Roxbury-based community health center that provides convenient access to quality medical and mental health care and human services. The Sheriff previously served as the Dimock Center’s Director of Marketing and Public Affairs prior to joining the Suffolk County Sheriff’s Department.