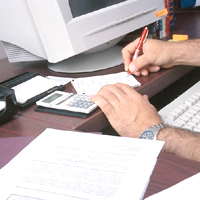 The Department’s Financial Services team is tasked with providing prompt, efficient service with respect to accounts payable, maintaining contracts, managing inmate accounts, procurement of goods and services, grants, and balancing the budget, among a multitude of other responsibilities. The Financial Services Division has implemented a series of improvements over the past few years to both the delivery of services and the systems through which they’re administered.

One of the significant alterations that have been made by the Division is the Implementation of Electronic Purchasing or “E–Purchasing.” The new system has resulted in stronger management of purchasing with an electronic signature chain for each department and person, which eliminates the past potential problems of paper Expenditure Requests (ER’s) being misplaced while allowing for tracking and a clear record of what’s been ordered, who ordered it and what’s pending. Planned upgrades to the E–Purchasing system include an archiving module, an RFQ (request for proposal) module, and a Capital Assets tracking module which will allow the Department to keep an accurate record of state assets.

Streamlining efforts undertaken by the Financial Services Division have resulted in accounts payable being brought up–to–date with fewer duplicative invoices, and vendor calls have decreased significantly. As a result, vendor relations were also enhanced leading to a higher quality of vendors bidding on service contracts for the Department. The use of Peachtree accounting software provides the Department with greater accountability with respect to inmate accounts.

The Division also works to achieve the current high level of communication and cooperation with multiple divisions of the Commonwealth of Massachusetts on relevant financial issues. The stronger communication between the Department, the State Executive Office of Administration and Finance, and the State Comptroller’s Office has been crucial in helping the Department to meet its payroll and purchasing needs while also attaining a balanced budget.

The Suffolk County Sheriff’s Department has also set a national standard through its Financial Services Division with the creation of a detainee invoice format, which has, for the greater part, been adopted by the Department of Homeland Security Bureau of Immigration and Customs Enforcement.