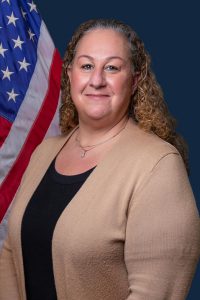 In 2005, she was promoted as the Assistant Director of Classification and Custody Assessment.  In this role, she oversaw the Special Management, Disciplinary and Classification units and the movement of inmates and detainees throughout the House of Correction.

In 2010, she was promoted to the position of Assistant Deputy Superintendent (ADS) to oversee the medical and mental health services contract, male and female program services, education and grant management. As ADS, she managed the medical and mental health services at the House of Correction and Jail as well as a number of treatment initiatives such as: the OASIS treatment program (Opioid and Addiction Services Inside South Bay) and the implementation of the Medication Assisted Treatment (MAT) program for the Department.

In 2021, she was promoted to the position Assistant Superintendent. She currently oversees the Department’s comprehensive medical and mental health services and food contracts, various treatment programs and initiatives, and is the Department’s liaison to the Massachusetts Trial Court, Specialty Courts and Probation.