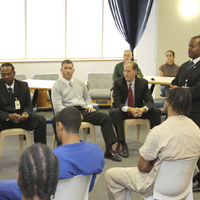 The Suffolk County Sheriff’s Department releases more than 3,000 inmates from the House of Correction and more than 13,000 detainees from the Nashua Street Jail annually. Research has shown that the first 24-hours after release is critical to offenders leaving the system. This partnership provides a multifaceted approach to help reduce the rate of recidivism for recently released inmates.

The Initiative includes an emphasis on mentoring, information sharing, treating addiction and employment opportunities for inmates after release. This program begins while offenders are still incarcerated at the House of Correction. In the first few months of incarceration, a panel, comprised of the U.S. Attorney’s Office, the District Attorney’s Office, parole, probation, community agencies and faith-based organizations meets with offenders and discusses issues that may affect a successful transition back into the community.