SHERIFF TOMPKINS, DEPARTMENT CONVENE “A CONVERSATION ABOUT RACE” BEFORE CROWD OF 350-PLUS AT ROXBURY COMMUNITY COLLEGE

SHERIFF TOMPKINS, DEPARTMENT CONVENE “A CONVERSATION ABOUT RACE” BEFORE CROWD OF 350-PLUS AT ROXBURY COMMUNITY COLLEGE 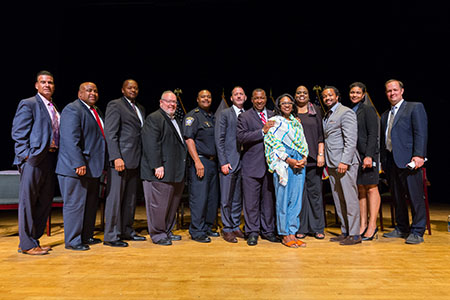 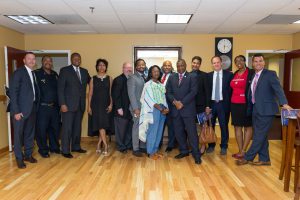 Before an audience of more than 350 people, Sheriff Tompkins opened the discussion with a brief statement about the timing and reasoning behind the topic.

“I have assembled a diverse and knowledgeable panel of experts to join me onstage to discuss what I believe is one of the most pressing issues of our times,” said Sheriff Tompkins. “While the topic of race may be a difficult and painful subject for some of us to address, I feel that this conversation is both necessary and long overdue.”

Diving into the issue, each panelist spoke from their unique experiences about some of the effects of racism in our society and what might be done to begin mitigating it.

“If you live in privilege, then equality feels oppressive,” said Andrea Cabral, former Secretary of Public Safety and Security. “This shows itself in the soft racism of bigotry and resentment. And, when people [reference the expression] ‘Black Lives Matter,’ it’s because, historically, they have not mattered.”

Speaking on the issue of equality and racial bias in society, particularly as they relate to the judicial system and law enforcement, panelists were in agreement about the persistent problem of systemic racism.

“We need a basic vocabulary to have a conversation on race – a common language for understanding,” said Michael Curry of the Boston NAACP. Curry went on to say that, “despite some progress, racial bias is still an issue in policing.”

“There are still unconscious biases that people have,” ADA Tonya Platt agreed, “and my job in the criminal justice system is to make sure that every defendant is seen and treated as the same.”

While panelists commended the Boston Police Department (BPD) and other Massachusetts law enforcement agencies for their roles in preventing some of the more explosive issues that have ignited wide community protest in places like Baltimore, Michigan, Louisiana and others, BPD Superintendent-In-Chief William Gross called upon everyone to do their part in continuing to work together.

“We all must know our own history and our own self-worth to move forward,” said Chief Gross. “Knowing what’s transpired before us and learning about how we got here to this point is the only way we will be able to come together and solve our problems.”

Focusing on economics, OneUnited Bank COO Teri Williams provided some eye-opening statistics about the historic lack of investment in the black community.

“When I think about race, I think about money,” said Williams. “African-American dollars do not stay in the community. The average net worth for white Bostonians is $256,000. For black Bostonians? It’s $700. Nationally, the black community spends $1.2 trillion dollars annually, but only two percent of it comes back into the community. We need to begin bringing that money back home.”

According to Sheriff Tompkins, one of the biggest roadblocks that have historically driven a wedge between communities has been the lack of opportunity.

“The American Dream that is built on opportunity and equality has not been afforded to so many people,” said Sheriff Tompkins.

“We need opportunity driven solutions in communities of color that are disproportionately affected by violence.”

Spanning just over two-and-a-half hours, the conversation about race was direct but cordial, and participants spoke about the need for action, even as they called for more similar discussions.

“Ask yourself ‘what do I do to advance what I think is important?,’” said Ms. Cabral. “Take responsibility for making change.”

“Tonight was very necessary,” said El Mundo President and Founder Alberto Vasallo, Jr. “We need to have uncomfortable conversations about race together as a group. It’s the only way.”

“It is my hope,” added Sheriff Tompkins, “that this is just the beginning of the discussion about race that other organizations, other institutions, other citizens will pick up and continue, because it’s crucially important to achieving a greater understanding of each other that will lead to the eventual dissolution of racism. It is time for us to recognize as a nation that our differences are our strengths and more than divide and separate us, they should be enriching and uniting us as one people.”