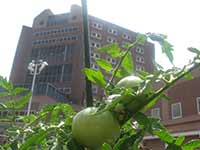 The three–year–old Urban Farming Program of the Suffolk County Sheriff’s Department has yielded impressive crops of vegetables and fruits, but nothing as significant as the potential for future employment and self-sustainability for its participants. This photograph is of tomatoes being grown in the prison yard of the House of Correction.

The Suffolk County Sheriff’s Department is once again hard at work planting the seeds for potential success with inmates at the House of Correction. Literally.

Now in its third year, the Urban Farming Program is an initiative developed by Suffolk County Sheriff Steven W. Tompkins and Department staff that teaches inmates the basics of farming with an eye toward employability and entrepreneurship.

With skills procured through the duration program, inmates have helped to transform a section of the prison yard into a thriving patchwork of boxes containing tomatoes, lettuce, celery, strawberries, raspberries, peppers, eggplants, collard greens, scallions, watermelons, basil, kale and much more.

Rooted in ideas of transformation and personal growth, the Urban Farming Program serves as a method to teach inmates critical lessons before their release. The program’s participants are specially classified inmates who are enrolled in a comprehensive training program where lessons surrounding the basics of urban agriculture are covered. Obtaining these skills not only makes them more marketable upon their release, but also provides a unique opportunity while still incarcerated.

“Ultimately,” said Sheriff Tompkins of the program, “the goal is to find new ways to make the population in our care and custody more employable and, therefore, better able to take care of themselves and their families. Coupled with our Culinary Arts Program and our upcoming Hospitality Program, we’re planting the seeds of successful futures with the hope that our participants can grow into entrepreneurs.”

While some might see the Urban Garden strictly as a mixture of soil and vegetation, its significance is much greater. Tangled into the roots of cabbages and raspberries are messages about responsibility, pride and nutrition. As Director of Vocational Education Captain David Granese states, “We are not just growing things out there, we are teaching valuable lessons. Having participants watch our garden grow, they get to see the fruits of their labor, literally, and they’re learning to grow a garden to sustain themselves.”

Furthermore, the garden allows for inmates to see the literal fruits of their labor in a full–circle view. For example, some Urban Farm Program members are also enrolled in the Culinary Arts Program, tending to their fruits and vegetables, ensuring that that they are bug–free, weeding the area, and fertilizing the soil. After picking the fruits and vegetables, inmates get to use these garden foods on the kitchen line, creating salads and other meals that they, the staff, and fellow inmates consume.

Beyond the benefits attained by tending to living things, the overarching benefits of the program are immense. The food cultivated in the garden and used to feed inmates assists in providing fresher, greener meals to inmates while serving their sentences.

Still, with all of the lessons learned and seeds planted, the proof still lies in the product.

Last year’s total agricultural yield? One–thousand–fifty pounds of food. And, the garden is off to a good start this season with more tomatoes, cucumbers and peppers expected along with first–time items such as potatoes and red onions. Perhaps most importantly, though, is the program’s potential to give its gardeners an opportunity to pursue non–traditional avenues of employment and give them more marketable skills. This is foundational to the Department’s mission of bringing down recidivism rates for those previously incarcerated. The Urban Farming Program is just one of many efforts underway by the Department to improve the number of former inmates who complete their sentences to fully return to their communities and prosper.

For more information about programming at the Suffolk County Sheriff’s Department, visit:www.scsdma.org.