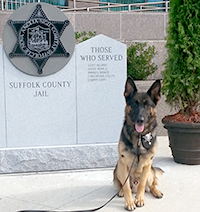 Established in 2009 to assist law enforcement agencies with obtaining this potentially lifesaving body armor for their four–legged K9 Officers, VIK9s maintains their donations through private and corporate sponsorships. To date, the organization has provided protective vests for over 1,190 law enforcement dogs in 40 states. VIK9s are made in the United States of America and are ordered exclusively from distributor Regency Police Supply in Hyannis, MA, which also provides the custom embroidery on the body armor for each law enforcement agency. One vest costs approximately $950 and carries a five–year warranty.

In August of 2013, the charity hosted its annual “Hog Wild for K9s” motorcycle ride, which raised over $15,000 for the purpose of providing 16 Massachusetts K9’s with protective vests. Included among those awardees was the Department’s Shadow.

Shadow is a two–year old German shepherd that is a certified as a dual–purpose dog in both patrol and narcotics. In October, 2013, he attended Boston Police K9 Academy patrol dog class and in December 2014, Shadow took top honors at the completion of Worcester Police Department’s Academy narcotics class.

Sheriff’s Department Corporal Robert Connelly, Shadow’s handler, is himself a well–trained officer and a certified National Police Dog One Judge. When asked about receiving the vest for his K9 partner, he had this to say: “I want to thank Sandy Marcal and the folks at Vested Interest in K9s for supporting the vesting of police dogs. Shadow is my partner and this vest will go a long way towards helping him perform his duties safely within our environment.”

Having a dual–purpose trained dog like Shadow presents significant savings for the citizens of Suffolk County and the Sheriff’s Department. With a small K9 team comprised of four dogs and handlers, the combined elements of expertise in dual purposes allows the Department to keep total costs down while delivering a high quality of work.

“We’re very grateful to have relationships with organizations like VIK9s,” said Suffolk County Sheriff Steven W. Tompkins. “Protecting our officers and their K9 partners is of the utmost importance, and our K9’s are sometimes out on the front lines with respect to answering mutual aid calls for drug searches and other duties. Having stab– and bullet–resistant vests for our K9s adds another layer of protection when they’re called upon to aid and assist in the field.”

VIK9s is a 501c (3) charity located in East Taunton, MA. Their mission is to provide bullet– and stab–protective vests and other assistance to dogs of law enforcement and related agencies throughout the United States. To learn more about the organization or to support their work, please visit:www.vik9s.org.