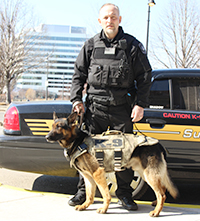 Back in January, the Sheriff’s Department was notified by the organization that K9 officer Shadow was chosen to receive the donation of a stab– and bullet–resistant vest. Following a visit to determine Shadow’s exact measurements, the vest arrived, perfectly tailored.

Shadow, a two–year–old German shepherd, is certified as a dual–purpose dog in both patrol and narcotics. In 2013, he attended a Boston Police K9 Academy patrol dog class and in 2014, he took top honors at the completion of a Worcester Police Department’s Narcotics Class. The K9 Unit is also an active support component of the Department’s Tactical Response Team (TRT).

Shadow’s partner, Sheriff’s Department Corporal Robert Connelly, had this to say after putting the vest on him for the first time, “This vest is made with state–of–the art materials that offer great flexibility and makes it very practical for use on Shadow. Some of the significant features on this soft ballistic and stab armored vest include extended pads for protection of his torso and dual hooks for assisting in trailing and tracking purposes. It even has a special compartment for placement of a flashlight or a beacon for aid during any instance when we are called upon to assist various other law enforcement agencies outside of the Sheriff’s Department.”

“I can’t thank Vested Interest in K9s enough for supporting dogs nationwide with protection vests,” he continued. “This vest will come in handy for Shadow while on duty supporting not only the Sheriff’s Department, but the entire community.”

For Suffolk County Sheriff Steven W. Tompkins, the issue of safety is paramount with respect to Department officers of both the two– and four–legged variety.

“I am grateful for the work that VIK9s does to ensure the protection of our Department K9s and those of other agencies,” said Sheriff Tompkins. “We share a similar commitment and passion for the wellbeing of our officers, and I’m glad that they’re out there helping to provide added safety to vulnerable members of our law enforcement community.”

VIK9s is a 501c (3) charity based in East Taunton, MA, whose mission is to provide bullet– and stab–protective vests and other assistance to dogs of law enforcement and related agencies throughout the United States. Through private and corporate sponsorships, they have provided over 1,317 law enforcement dogs in 49 states with protective vests since 2009 at a cost of over $1.2 million dollars. To learn about their organization and about how you can support their efforts, please visit the Vested Interest in K9s website at: www.vik9s.org.