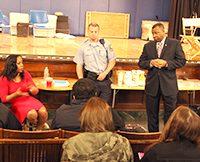 EAST BOSTON – Suffolk County Sheriff Steven W. Tompkins visited the East Boston High School Chapter of the NAACP to speak with students about one of his key initiatives – education.

Standing before the group of participants in the honors seminar “Justice, Injustice and Street Trauma in American Cities” – a student led program – Sheriff Tompkins spoke about avoiding some of the pitfalls and poor decisions that often lead to court involvement for young people, and about the critical need to continue their studies.

“This is such an important time for you,” said Sheriff Tompkins. “Your future can turn on the decisions that you make today, and education is absolutely crucial to that future being a positive one. We need you to be educated and civically engaged, because you are the leaders who will be the stewards of not only our communities, cities and states, but of our world.”

Sheriff Tompkins then spoke about the importance of rehabilitation for those who have, for whatever reasons or circumstances, ventured down the wrong path and into the prison system.

“I often refer to ‘being in the second–chance business,’” Sheriff Tompkins continued. “Our goal is to return the people in our care and custody to society in better shape than they were in when they came to us. From my perspective, we really have no choice but to provide the kinds of programming and resources that will help ex–offenders to learn from their mistakes and become positive, productive citizens. Otherwise, what kind of society are we trying to build here?”

For Janelle Ridley, a teacher and coach at East Boston High School, the presentation by Sheriff Tompkins was a step in the right direction.

“This class that Sheriff Tompkins and his team have so graciously supported since the initial process does not want to see a wave of young people within the prison walls,” said Ms. Ridley. “They want to have a more proactive approach to stopping the cycle of generational dysfunction that seems to plague young people of color in disproportionate numbers.”

“We’re grateful for the Sheriff’s visit,” said Dean Cauley. “This has been a great experience. The kids expressed ideas and opinions [today] in a way that I never imagined that they would be able to do in such a short amount of time.”