Suffolk County Sheriff Steven W. Tompkins and the Department hosted an in-depth discussion about gun safety, violence, and crime with a panel of experts that brought a wide variety of perspectives to the stage of the Media Arts Building at Roxbury Community College. 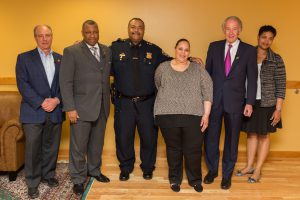 Suffolk County Sheriff Steven W. Tompkins and the Department hosted an in-depth discussion about gun safety, violence, and crime with a panel of experts that brought a wide variety of perspectives to the stage of the Media Arts Building at Roxbury Community College.

“I believe that it’s extremely important to have meetings like this one in the community so that we can begin addressing some of the critical issues that detract from and add to a positive quality of life,” said Sheriff Tompkins. “Feeling safe in your neighborhood, particularly with respect to guns, is of major concern and this panel has a wealth of knowledge to impart on the subject.”

Echoing Sheriff Tompkins’ sentiments, Senator Markey called out one organization that he believes to be the key stumbling block along the road to sensible gun law reforms.

“We have the right to feel safe in our neighborhoods and we need to stand up to the National Rifle Association (N.R.A.),” said Senator Markey. “The N.R.A. has never been interested in compromise or common sense gun safety reform. So, I am working for the day when the initials N.R.A. stand for ‘Not Relevant Anymore.’”

Speaking about his organization’s efforts to curb gun violence on the streets of Boston and beyond, Superintendent-In-Chief for the Boston Police Department William Gross stressed a team approach, with neighborhood residents as the most important players.

“We are doing things a little bit differently today at the Boston Police Department than we used to,” Chief Gross said. “We’re really working to connect with the community, to hear about your needs and suggestions about how we can work together in the best way. It’s not only the responsibility of the police to keep the community safe – it also falls on our citizens to step up and help us by staying engaged and telling us how we can better collaborate.”

Sharing her personal experience as a woman who was convicted of possession of an illegal firearm when police recovered a gun stashed in her car by her then boyfriend unbeknownst to her, Ada Pantoja also spoke about the need for educational programs that preach caution against similar scenarios and support people who are trying to stay on the right path.

“We need more education about where the programming is that can help our young people to stay off of the streets and away from danger,” said Pantoja. “We need more programs where young people who are doing the right thing can go to get support.”

Giving an overview of the Suffolk County District Attorney’s Office and the judicial system’s “gun court,” ADA Platt explained the importance of its functions with respect to community safety.

“The [gun court] was created to help reduce the backlog of gun cases in the Boston Municipal Court and reduce the amount of time from arraignment to disposition.” This, said ADA Platt, is essential to keeping violent offenders off the streets while freeing up the system to process other important cases.

Touching upon a broader range of issues, including addiction and recovery, mental health programming, civic responsibility and engagement, education and others, panelists inevitably circled back to one of the night’s recurring topics of conversation.

“Here in America, we suffer 90 gun deaths and mass shootings every day,” said John Rosenthal. “One would think that this would spur action toward sensible and responsible gun laws. But, the gun lobby doesn’t want to have rational discourse about responsible and effective gun laws. No one is looking to ban gun ownership – unless we’re talking about military-style assault rifles and guns with large capacity ammunition magazines. We’re talking about sensible laws that protect our citizens and the people on the front lines – our police officers.”