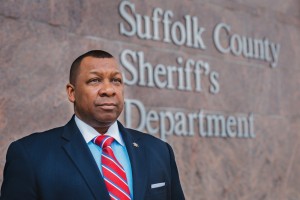 Suffolk County Sheriff Steven W. Tompkins and the other thirteen county sheriffs are standing in opposition to an initiative that would legalize and tax marijuana sales in the state of Massachusetts.

In his capacity as the President of the Massachusetts Sheriffs Association (MSA), Sheriff Tompkins spoke about the organization’s unanimous decision to stand against the “Regulation and Taxation of Marijuana Act” and some of the nuances of the issue that led to the decision.

“While the Massachusetts Sheriff’s Association is sensitive to the many arguments made in favor of this initiative, and is equally sensitive to the complex criminal justice, economic and public health implications of current drug sentencing laws and practices, we cannot in good faith support a referendum that would inevitably destigmatize drug use and make it easier for young people to gain access to a controlled substance,” said Sheriff Tompkins.

Several reports – including those published by such authorities as the Journal of Neuroscience and the World Health Organization (WHO) – cite that long-term cognitive and motor skills may be negatively affected by chronic, prolonged use, and data released by the National Institute on Drug Abuse (NIDA) recalls a study in which people between the ages of 13 and 38 who were frequent users as teens, suffered an eight-point drop in IQ, even after they quit in adulthood. Other reports show that one in six young people who try the drug recreationally eventually become addicted.

“As a Commonwealth, we need not take actions that could increase availability to, and use of drugs among, young people,” said Sheriff Tompkins. “If this referendum were to pass, Massachusetts would surely see an increase in the amount of Marijuana use and addiction.”

Sheriff Tompkins and the Massachusetts Sheriffs Association are joined by Governor Charlie Baker, the Massachusetts District Attorneys, Boston Mayor Marty Walsh, and Attorney General Maura Healey – among others – in their opposition to the Marijuana legalization initiative.