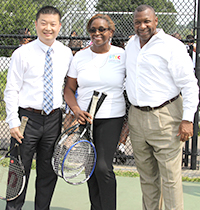 The Summer Learning Project, which has enrolled 6,754 Boston school children in 78 summer learning programs, seeks to support a wider variety of children with a goal of serving 10,000 within the next two–year duration. The Summer Learning Project consists of multiple summer learning sites including non–traditional educational locations such as Franklin Park Zoo and the Boston Harbor Islands.

Through coordinated public/private efforts, more young Bostonians will benefit from summer learning programs, which reinforce their skills and bolster their confidence levels before returning to school in the fall. Mayor Marty Walsh, BPS Superintendent Chang, Chris Smith, and Alexander Mathews spoke to the assembly of community members, young people and press, about the significant impact that the Summer Learning Project has.

“The Summer Learning Project is great on a number of fronts,” said Sheriff Tompkins. “Our kids are being engaged during the summer months and this is especially important because there’s far too much time in the summer months for young people to potentially get into trouble. Having students occupied with their studies is a great thing, especially when we know that those who are mentally stimulated throughout the summer months are at a better advantage educationally than those who didn’t partake of any enrichment programming.”

At the conclusion of the presentation, Sheriff Tompkins was thanked for attending the event before stepping onto the tennis courts to join city officials and students from STEC for a few rounds of tennis.

Speaking about the chosen location of the event, Sheriff Tompkins stated that, “To have the Summer Learning Kick Off at the Sportsmen’s Tennis and Enrichment Center shows that the city understands the intersection of athletics and academics, and reinforces the idea that kids should have constructive play. Education and athletics should be available to more youths and now it will be, thanks to this new summer programming that will enroll 10,000 school children over the next two years.”