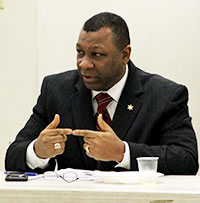 “Because of mandatory minimum sentencing, judges are left with little to no discretion with respect to sentencing for low–level, non–violent drug offenses,” said Sheriff Tompkins. “The vast majority of the people in our custody and care at the Suffolk County House of Correction and the Nashua Street Jail – in fact, more than 85% of them – are there for drug related offenses.”

With a thematic focus on “Violent Street Trends” for their monthly meeting, the TenPoint Coalition invited Sheriff Tompkins to discuss the topic and share his expertise on rehabilitation and reentry.

“Many of these people really belong in an addiction recovery program or diversionary program instead of with us behind bars,” Sheriff Tompkins continued, “but, due the lack of judicial discretion and the scarcity of recovery beds in the community, they’re locked in our facilities at about $46,000 a pop, per year. Clearly, the current system is not working.”

Sheriff Tompkins also spoke against the current law that calls for the forfeiture of a motor vehicle license by convicted of drug offenses for a period of up to five years, even if the crime had no connection to the operation of a motor vehicle. The law also requires that the ex–offender be charged a reinstatement fee of $500 before their driver’s license is renewed.

“We’re asking these people to serve their time, come out and earn an honest living, and not reoffend, but we’re decreasing their chances for success by taking away their ability to get to worksites that may not be accessible by public transportation,” said Sheriff Tompkins. “It’s patently ridiculous and runs counter to the rehabilitational efforts that we’re undertaking in our facilities.”

Earlier this year, Sheriff Tompkins co–sponsored Senate Bill SD1874 and House Bill HD3425: “An Act To Increase Neighborhood Safety And Opportunity,” introduced by Senator Sonia Chang Diaz and Representative Mary Keefe, which would, among other actions, repeal mandatory minimum sentencing and end collateral sanctions at the Registry of Motor Vehicles.

The Boston TenPoint Coalition is comprised of Christian clergy and lay leaders who are committed to “mobilizing the Christian community around issues affecting youth, especially youth at high–risk for violence, drug abuse, and other destructive behaviors.” To learn more about them, visit:www.btpc.org.