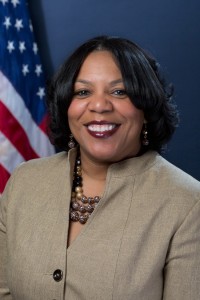 Yolanda Smith has been with the Department since 1995, beginning her career as a correction officer at the House of Correction. In 1997, she became a DARE (Drug Abuse Resistance Education) officer and worked in the community and in the public school systems. She has also served as Corporal, Lieutenant, Captain, Assistant Deputy Superintendent, Assistant Superintendent and in February of 2013, she was promoted by Sheriff Steven W. Tompkins to the rank of Superintendent of the Suffolk County House of Correction where she oversees an inmate population of nearly 1,800 and a staff of more than 500 trained correction officers.

Under her leadership as the former Director of Training for the Suffolk County Sheriff’s Department, the Department received excellent audit results, meeting all CMR standards.

Superintendent Smith is an active member of the Massachusetts Sheriff’s Association Education Training Committee, where she serves as secretary to the executive branch of the committee. For the past five years, Superintendent Smith has been co–chairperson of the MSAETC Spring Conferences bringing forth new, innovative topics that benefit a wide array of public safety personnel. In 2010, Superintendent Smith successfully completed the F.B.I. Crisis Negotiator course which had various agencies represented from across New England, and she is a 2010 graduate of Lead Boston. She is the lead instructor of the Choice Officer Training program and continues to seek innovative ways to keep the training curriculum current and applicable to the needs of the communities and schools. Superintendent Smith serves on the Department’s Policy Review Committee and is currently on the MCAD (Massachusetts Commission Against Discrimination) Referral list of trainers in Harassment/Discrimination prevention in the Workplace. Prior to working with the Department, Smith served as a substitute English teacher in the Lynn Public School System.