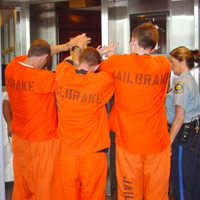 The Department has a program in place called Jail Brake. Jail Brake is offered as a resource to schools, community groups and various juvenile agencies. The program is directed towards troubled youth, between the ages of 12 and 16, who have already shown signs of criminal activity. These young adults are brought into the facility in an attempt to educate them that the choices they are making may lead to undesirable consequences.

Nationwide, we have seen a significant increase of female arrests. According to the Federal Bureau of Investigation, arrests among females are on the rise. Additionally, a study conducted by the Pew Charitable Trusts in forecasting America’s prison population from 2007–2011, projects that nationally female inmates will increase 16 percent compared with 12 percent for males.